The Pilates method focuses on strengthening and stabilising the core muscles in order to benefit the whole body.  To this end, we strengthen from the inside out.  Instead of strengthening muscles that we can see very readily, such as the rectus abdominis – honing the six-pack – Pilates will work with deeper muscles first.

For example, one muscle we do a lot of work with is the transversus abdominis which lies beneath the rectus and  when toned  will kick in a whole sequence of events and ideally benefit the whole body.  With regular Pilates exercise, we will inevitably change the way we move and essentially retrain the body to move correctly, using the correct muscles in the correct sequence. Pilates exercises require concentration and attention to detail, where a sense of wellbeing is felt from the very first session.

The result is a longer, stronger, more toned body with lovely long muscles you will be proud of. Exercises are broken down initially so that the body has time to adjust to the new movements, and hence you can safely enjoy the changes that are taking place in your body. With practice, postural defects can be corrected and you will greatly improve your overall fitness. Not only will your body look great, it will feel fantastic too. 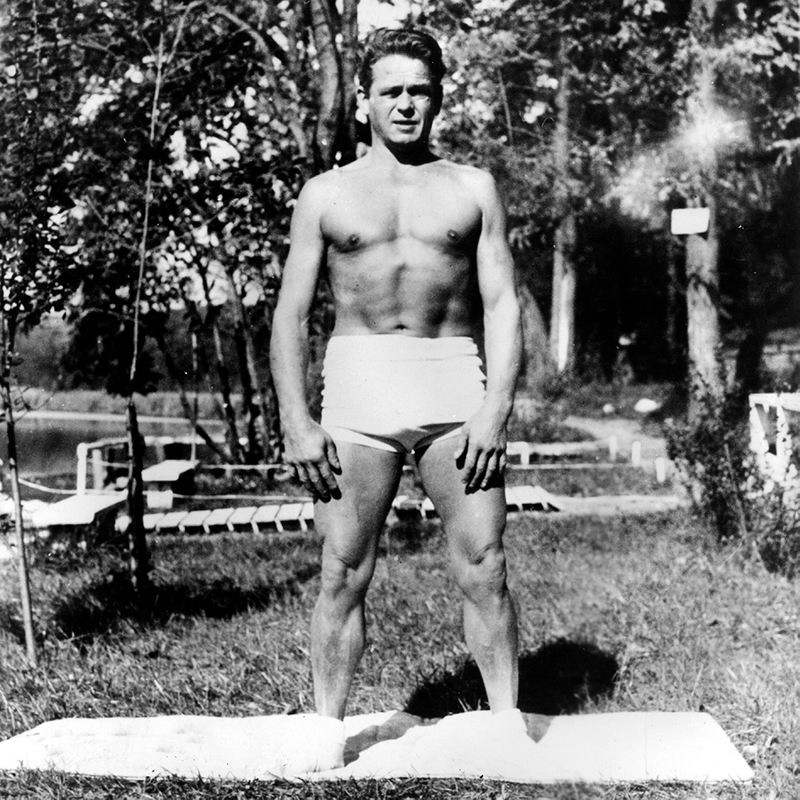 Joseph was born in Mönchengladbach, a small town near Dusseldorf, Germany, in 1880. He was a small and sickly child who suffered from asthma, rickets and rheumatic fever. His name had been spelled “Pilatu” and was of Greek derivation but was changed to Pilates. This caused him much grief because, as a child, older boys taunted him calling him “Pontius Pilate, killer of Christ”. He was so skinny that he couldn’t fight back and it was these conditions that caused him to begin the journey to fitness and health. His father was a prizewinning gymnast and his mother a naturopath. A family physician gave him a discarded anatomy book and as he put it “I learned every page, every part of the body; I would move each part as I memorized it. As a child, I would lie in the woods for hours, hiding and watching the animals move, how the mother taught the young.” he said. He studied both Eastern and Western forms of exercise including yoga, Zen, and ancient Greek and Roman regimens. By the time he was 14 he had worked so hard he had developed his body to the point that he was modelling for anatomy charts.

Growing up in Germany, he achieved some success as a boxer and a gymnast in addition to being a skilled skier and diver. There are 2 versions of how he travelled to England. One version has it that in 1912 he decided to go there to work as a boxer and another, that by 1914 he had become a star circus performer and toured England with his troupe. In this version he and his brother were performing a Greek statue act! In 1914 after WWI broke out he was interned along with other German nationals in a “camp” for enemy aliens in Lancaster. There he taught wrestling and self-defense, boasting that his students would emerge stronger than they were before being interned. It was here that he began devising his system of original exercises that later became “Contrology”. He was transferred to another camp on The Isle of Man where he became something of a nurse and worked with many internees who suffered from wartime diseases and incarceration. He then began devising equipment to rehabilitate them, taking the springs from the beds and rigging exercise apparatus for the bedridden! In 1918, a terrible epidemic of influenza swept the world, killing millions of people, tens of thousands in England. None of Joe’s followers succumbed even though the camps were the hardest hit!

After the war Joe returned to Germany and began training the Hamburg Military Police in self defense and physical training as well as taking on personal clients. He said, “I invented all these machines. Began back in Germany, was there until 1925 used to exercise rheumatic patients. I thought, why use My strength? So I made a machine to do it for me. Look, you see it resists your movements in just the right way so those inner muscles really have to work against it. That way you can concentrate on movement. You must always do it slowly and smoothly. Then your whole body is in it.” It was at this time that he met Rudolf von Laban, a famous movement analyst, who is said to have incorporated some of Joe’s theories and exercises into his own work. Mary Wigman, a famous German dancer and choreographer was a student of Joe’s and used his exercises in her dance class warm-up.

In 1925 he was invited to train the New German Army but because he was not happy with the political direction of Germany he decided to leave. On the urging of boxing expert, Nat Fleischer and with the aid of Max Schmelling he decided to come to the U.S. It was en route to America that Joe met his future wife, Clara. She was a kindergarten teacher who was suffering from arthritic pain and Joe worked with her on the boat to heal her. Upon arriving in New York City they opened a gym at 939 Eight Ave, in the same building as several dance studios and rehearsal spaces. It was this proximity that made “Contrology” such an intrinsic part of many dancers’ training and rehab work and many were sent to Joe to be “fixed”. George Balanchine, the famous choreographer, studied with Joe and sent many of his dancers to Pilates for strengthening and “balancing” as well as rehabilitation, as did another famous dancer/choreographer, Martha Graham. From 1939 to 1951 Joe and Clara went every summer to Jacob’s Pillow, a well known dance camp in the Berkshire Mountains. He was a friend and teacher to such renowned dancer/choreographers as Ted Shawn, Ruth St. Denis, Martha Graham and Jerome Robbins and many required their dancers to go to Joe. Hanya Holm even incorporated Joe’s exercises into her students’ lessons. However, Joe counted many socialites as his clients as well.

Joe felt his work was “50 years ahead of (his) time”. Joe’s definition of physical fitness was: “the attainment and maintenance of a uniformly developed body with a sound mind fully capable of naturally, easily and satisfactorily performing our many and varied daily tasks with spontaneous zest and pleasure”. Joe believed in “natural movements” with the emphasis on doing and being. He has stated, ” Everything should be smooth, like a cat. The exercises are done lying, sitting, kneeling, etc., to avoid excess strain on the heart and lungs.” Romana Kryzanowska, the heir to Joe’s work is quoted as saying ” The key to working with the apparatus is they make you do the work yourself. The springs provide or create endurance, not excess strength. The method is based on the movement of animals, everything about the method is based on moving naturally.” Carola Trier, a longtime student of Joe’s and teacher of his work said ” The method emphasizes restoring the body to true balance, ease and economy of movement and a channelled flow of energy.”

Although Joe Pilates was a health guru, he believed in fitness supporting your life’s rich goals. He was renowned for liking cigars, whiskey, and women and was to be seen running on Manhattan streets, in the dead of winter, in a bikini!

In January 1966 there was a fire in their building. Joe returned to his studio to try and save anything possible and fell through the burnt out floorboards, hanging by his hands from a beam for quite some time until rescued by the firefighters. It is assumed that this incident directly led to his death in October 1967, at the age of 87. Clara, regarded by many as the more superb teacher, continued to teach and run the studio until her death 10 years later, in 1977. At this time Romana took over the business and has dedicated her life to teaching Joe’s work as he himself devised it.